ILA Press release: Metformin, Zuckerberg and British citizens on the road to longevity

On December 2nd, the US Food and Drug Administration authorized a five-year test of Metformin  on 3,000 people aged 60 and older. Metformin already allows a dramatic lengthening of life for diabetic patients. The objective of this revolutionary research is to check whether aging in "ordinary" elderly citizens is slowed down with this product (like it is in mice). In other words, the goal is to treat aging as a disease.

The day before, on December 1st, Mark Zuckerberg, celebrating the birth of his daughter, decided to devote most of his fortune, or 43 billion dollars to create (with his wife) a non-profit company. One of the objectives of the company will be to fight against the diseases that remain today. In a letter to his daughter and his few (million) Facebook friends, he writes: "Today we spend about 50 times more as a society treating people who are sick than we invest in research so you won't get sick in the first place. (...) Can our generation cure disease so you live much longer and healthier lives? "

Mark, you're not alone. According to a survey, 87% of the readers of the British newspaper Daily Telegraph would choose to "take an anti-aging pill in order to live until 120" if they could. Among the 20,000 respondents, 87% were technoprogressives and no more than 13% were bioconservatives.. 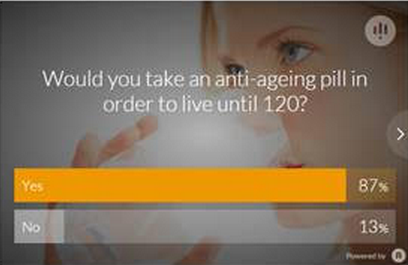 We are changing the medical paradigm. Old age (but not old people, we insist) sucks, but now we can do something about it! This current (r)evolution is the one we wish for as longevists. But diseases due to old-age are something not to fight only in a few promising places in the US. We invite public authorities and private companies to do the same everywhere in the world. Intense public research will enable faster development, which will guarantee more accessibility and sharing of medical information for the benefit of new therapies for all. New private companies can accelerate the pace of discoveries. Thousands of scientists and billions of citizens would benefit from a new political will to ensure that all, beginning with the poorest, can enjoy a much longer and much healthier life. It is time to act.

Sources of information, see among other things: